Why We Bought the Ruby 7 HD

At my school, we were recently able to purchase several Ruby 7 HD video magnifiers, manufactured by Freedom Scientific.  In case you are not familiar with the device, it is what I would term a "handheld, slanted, stand video magnifier."  As you can see from the pictures in this post, it is not a large desktop video magnifier that needs to be plugged in.  It is not a portable video magnifier like the APH Visiobook or LVI Magnilink Zip.  It is also not a traditional handheld like the APH Video Mag HD or Eschenbach Mobilux Touch.  That said, I want to give a few reasons for why we decided to purchase the Ruby.  Hopefully, these comments will help you think about what your or your student's needs are relative to a video magnification. 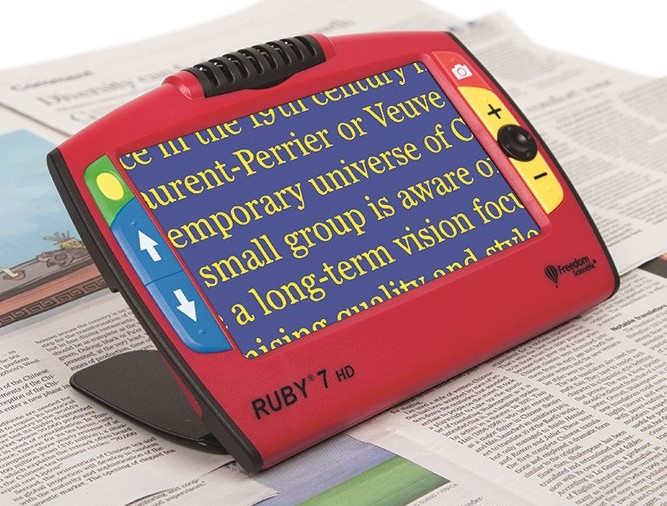 The Ruby 7 HD has a 7 inch screen, and it is primarily meant to be used for reading near materials by being placed on the reading materials.  The Ruby has a black stand that folds out to become a base, and the Ruby 7 HD's screen is held up at an angle toward the user.  This allows for a slant board type concept for improving the user's viewing angle.  I am a huge fan of this, since many of my students would otherwise need to lean over a different video magnifier for optimal viewing.

The Ruby 7 HD has a feature called PivotCam, regarding the camera in the black housing at the top of the device.  It can be rotated to face outward for decent distance viewing inside of 10 feet, and it can also be turned to face the user for self viewing.  This sort of camera versatility is unprecedented at this size profile, and has been most well known to those who used the Visiobook.

Basic functionality aside, let me discuss fit for a bit.  My school is a state school for the blind, and we are very familiar with the world of video magnifiers.  Specifically, we have a number of Visiobooks and Magnilink Zips that we have purchased in the last 5 years that we have incorporated into our various classrooms in mostly phasing out the use of large desktop video magnifiers.  The Visiobook and Zips, portable video magnifiers, are useful in that their battery powered flexibility allows them to be moved around and between classrooms easily.  Still, in the last few years, I have encountered more and more students who prefer to have that magnification solution that they can take with them individually from class to class in their backpacks.  The Visiobook and Zips are portable, sure, but their 10-11 inch screens and larger frames are not nearly portable in the same way.  Furthermore, students have expressed reluctance to use larger portable video magnifiers due to personal issues with standing out.  Yes, even at a state school for the blind, they tell me that they would rather use a device that is more discrete.

I think the Ruby 7 HD is a great combination of features and design elements, packed into a device that has a screen size that can be used functionally by the majority of my students who have low vision.  It compares well against other handheld video magnifiers that have smaller screens (Video Mag HD, Mobilux Touch, Smartlux, etc.) and generally need to be held up while reading.  Instead, the Ruby 7 HD has a built in stand and a larger screen that allows for more magnified words to be read at once, leading to more fluent reading.  The Ruby 7 HD, when placed in stand position, can also be used for short magnification of writing assignments; the user would place their writing utensil between the camera and the paper.

Nowadays, I should also provide a comment on the Ruby 7 HD versus smart solutions like iPads.  iPads are becoming more and more useful, including in their available accessibility features.  Still, I think the Ruby 7 HD has its competitive place as a dedicated device.  The built-in stand is a plus, and the versatile PivotCam is also a great feature.  iPads have larger screens and similar video magnifier features within the Magnifier, but an additional (likely bulky) stand will need to be purchased, and positioning the device to best view print will be tricky.  For pure visual access to printed materials, I'd take the Ruby 7 HD.

That's all I've got on this topic!  What do you think?  Would a device like this be helpful to you or your students?  Don't buy by argument for it over iPads?  Let me know in the comments!